The Passio secundum Joannem or St John Passion is a Passion or oratorio by Johann Sebastian Bach, the older of the surviving Passions by Bach. It was written during Bach's first year as director of church music in Leipzig and was first performed on April 7, 1724, at Good Friday Vespers at the St. Nicholas Church. In collaboration with the University of Minnesota School of Music, Bach Society of Minnesota returns to the place of its founding at the University of Minnesota in a collaborative presentation of Bach’s dramatic Passion oratorio.

About the Bach Society of Minnesota

The Bach Society of Minnesota (BSM) was the one of the first organizations on this continent to take the legacy of Johann Sebastian Bach as an exclusive starting point for world-class performances. Founded in 1932, BSM still focuses on the glorious vocal and instrumental music of J.S. Bach and those he inspired. Today, under the artistic direction of Matthias Maute, the organization continues its commitment to high-caliber performances with period instruments and historic performance practices that communicate the depths and passions of Bach’s compositions. 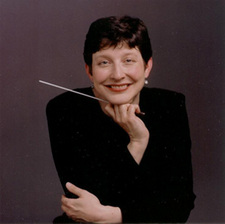 Kathy Saltzman Romey is Director of Choral Activities at the University of Minnesota, where she oversees the graduate program in choral conducting and conducts choirs. She is also Artistic Director of the 200-voice symphonic chorus, The Minnesota Chorale, which serves as principal chorus for the Minnesota Orchestra. Known for her meticulous training of choirs, Romey has prepared the Chorale for performances with both the Minnesota Orchestra and Saint Paul Chamber Orchestra under the baton of such acclaimed conductors as James Conlon, Nicholas McGegan, Bobby McFerrin, Roger Norrington, Helmuth Rilling, Robert Shaw, Leonard Slatkin, Osmo Vänskä, Edo de Waart, and Hugh Wolff. Romey has conducted the Chorale in regional, national and international forums and in performances with both the Minnesota Orchestra and Metropolitan Symphony.   She also coordinates and presents the BRIDGES series, the nationally acclaimed education-outreach program of the Minnesota Chorale. Begun in 1994 to build musical and social bridges between diverse populations, BRIDGES is an annual initiative that harnesses the richness of global choral repertoire to engage cultural communities and raise awareness of pressing social needs. A passionate advocate of choral civic engagement, Romey documented the BRIDGES program in a co-authored chapter with two University of Minnesota conducting students for the book Wisdom, Wit and Will: Women Choral Conductors on Their Art, released by GIA Publications in 2009.